Here are some thoughts I wrote down over the course of two days from about a year ago. Each paragraph is accompanied by some relevant pictures (click on them to enlarge). Enjoy!
It’s 12:51 am. I am listening to This Deed by Electrelane. I just watched an episode of The Daily Show. It was good, but too short. Another few hours and I will be able to play left4dead. What an amazing video game. Lately I have been playing the demo with some of my clan mates. When I close my eyes, all I see is hordes of zombies coming at me. That happens a lot with me when I do something repetitive. This is especially true when I do a lot of mushroom picking. My dreams are worse though, visions of swaying giant mushrooms begging for me to pick them.

The mushroom buyer is closed now. Another season comes to an end. What will I do tomorrow. I guess it already is tomorrow. At least the end hasn’t come. Has it? Not likely, I would be dead, but how would I know that this isn’t life after death? What if this is death? Nah, death is probably just non-existence similar to that of what I remember from before my birth. People talk about being able to remember their previous lives. I can see how it could be fairly difficult for some people to differentiate between reality and fantasy. I have had dreams in which I was convinced it was reality even though the events taking place in my dream are so utterly bizarre and improbable that it can’t be real. When I wake up though, I am usually glad to realize that it was just a dream and I really wasn’t working for a mad scientist helping him mutate rabbits.

It is difficult to fetch rabbits from the outdoor pen when I am dodging mini tornadoes and witnessing a morbidly obese lady getting torn apart by one. If I can just return with two nice unharmed bright white rabbits for the boss, he will remain happy and I can live for another day. Of course, the trip back proves difficult, as the tornadoes have grown in size and intensity. I clutch the ground in a futile attempt to not get swept away into the horrible chaos above me. My body is ripped from the earth’s surface and then I see my pillow with my hand laying on it and the beige wall in the background. There is some dried up drool in the corner of my mouth and down my chin. Reality bites.

It is Tuesday, November 18th 2008, what will I do today? When should I get out of bed? I think showering would be a good idea followed by some eating of some sort and then maybe some gaming. Call of Duty 5 and Left4Dead should suffice. I think I will purchase my supper from some downtown eatery, not fast food though, something a little more delicious and possibly healthier.

I hope today is a fun day. If I could create something today, something that would move me forward through a shield of bananas and through a daisy chain spaghetti finish line into a giant bowl of pudding, I would be happy. Especially if I can take some of the bananas from the banana shield and slice them up and put them in the pudding and eat it. Also, I hope that none of the spectators would be opposed to me tying the bowl of pudding onto the back of my car and dragging it down the road to my home. This is where I will consume the rest. None for you! 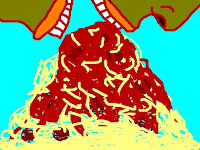 Photo Sources: Gryphonscry, Self, Guardian, Self

Posted in: SLORPIS. Bookmark the permalink. |

2 Responses to Some Thoughts