I recently moved to Winnipeg, Manitoba and decided that I would take in the sights of the city. I ventured out on foot into the heart of Winnipeg with my camera at my side. This is what I saw. 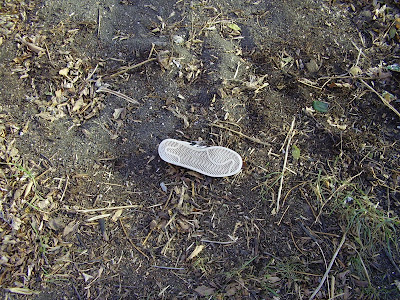 The lone shoe. I spotted this shoe lying in the dirt beside a bus stop and decided to document it. After taking this photo, I realized that I see a lot of lost shoes strewn about all over the place, but I never actually see a pair of shoes together. Its always one shoe Vasily, one shoe only. This made me wonder as to the reason behind this and the only logical explanation I could think of is tiny inter-dimensional worm holes on the display wall in shoes stores located in other dimensions. That, or drunks stumbling around in the dark, but I tend to lean towards the former. Lets take a closer look in attempt to try to solve this mystery.

I think it’s an Addidas shoe and it looks like someone got considerable use out of it before losing it. I guess that throws the worm hole theory straight out the window for this particular shoe. How depressing.

The following photo; however, can only be explained by drunks in the dark.

That there is a dirty sock in the Shoppers Drug Mart parking lot. At first I had this thought that maybe this is where all the socks end up that go missing from the dryer, but upon closer inspection, I realized that this sock is fairly dirty and so that theory went straight out the window as well. Here is a closer look at the sock and it’s associated dirtiness.

I think someone may have used this sock in place of toilet paper and I think they ate Chinese food.

Well, that was about the extent of what I found on my walk in Winnipeg. Well, actually, there was one more thing that I saw that I found fairly peculiar, but I quickly figured it out after thinking about it for 2 seconds. Maybe you can figure it out too. There was a sign that someone posted on a telephone pole. Take a look.

It reads, “info on my where abouts, plz call” and then there are some telephone numbers which I have blurred out. At first I thought it was pretty funny, like a random person had posted a sign with their phone number so that another random person could find this mystery person if they chose to do so. It didn’t make any sense, but then I used my extreme skills of deduction and it became quite obvious what had occurred here. The top of the sign is ripped off so there must have been more information about a lost cat or dog written in the perspective of that lost cat or dog. Something like;

That’s my theory anyway. Anyone else have any other explanations for this mystery sign?

4 Responses to MY Winnipeg